Firstly with this cities prepare for one big jump to history. But in every this city you can find historical as well as modern city centres. Nice long walks, when if you let go your fantasy on, you can fell like you are in era of princesses.

If you are not traveling on New Years Eve you can get there by plane with quite cheap flights. 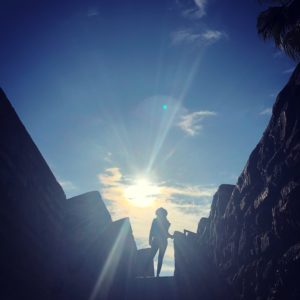 Basically is there the easiest way to rent car on the airport. But be careful with your pick, I didn’t met anywhere bastards in car rentals like here in Malaga. I already got robbed there twice. Tip I got to late but I will write it to you. If you will buy flight tickets during the Ryanair rent car directly with flight tickets, its cheapest way I found there.

Malagas city centre is nice, small and historical (this word I will use often in this article :-D) with many modern shops. What I found nice there was nice walk by the sea in Port, Alcazaba and Castillo.

Castillo Gibralfaro are ruins of a Moorish castle and fortress which are high on a top of mount Gibralfaro with charming views.

We stayed in hotel EXE Astoria in city center, hotel was nice with good breakfast and 2 minutes walk to city centre, 10 minutes to walk to the seaside.

In my opinion one day for this city is more than enough. 🙂

From Malaga to Granada count with 140km long journey. Its historical city but one thing amazed me a lot against the other cities and it is complex ALHAMBRA. It’s a palace and fortress with gardens, which construction started AD889. To see it all is almost for whole day and have in mind, that you MUST buy tickets in advance online. There is no possibility to buy ticket directly on the place. Tickets HERE.

It is something different than all the same stuff in other cities like big Cathedral everywhere, this is something worth to see. Others stuff to see: Generalife, Cathedral, Royal Chapel, Palace of the Marques de Salar and other buildings, but like I said, it’s similar to other cities. 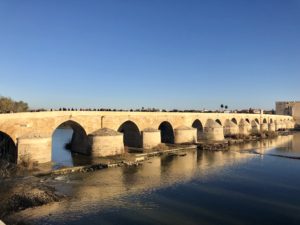 This city is 163 km far from Malaga and 214 from Granada. Another (I need to use that word again and again) historical city where what amazed me a lot  was Great Mosque of Córdoba, old mill next to bridge which is worth to see too and gardens of Alcázar de los Reyes Cristianos.  Other stuffs are historical buildings which are everywhere. One thing, which I totally didn’t get, was same famous Floral street, where are flowers on the walls and it end with dead end. There are so many tourist going to see that, it’s crowdy, nothing for claustrophobic people and nothing that, why is that street that famous, I don’t know 🙂

If is your starting point Ma

laga then this city is 200km far, we traveled from Gibraltar and it was just 115km and there is possible to go longer way trough Tarifa (more info below in Tips.) With this city I wasn’t so much amazed with their city centre, but what took my breath was entrance to the city through huge nice bridge. This city is almost an island. If you are there go Castillo de san Sebastian which is on solo island and on the La Caleta beach there was filmed James Bond movie Die another day with famous Jinx (Halle Berry famous scene going out from sea). There is Cadíz Cathedral and big market with fresh fish, have in mind that they are closing at 3:30PM.

*Tips where to go, when you are in south of Spain*

It contains the highest point of continental Spain and third highest one in Europe. There is Mulhacén with 3,479 metres above sea level. And this place is really popular for skiing and for its National park.

Wild wild west Studios in Fort Bravo – Almeria – they are most important cinema studios in Europe, where most of Wild West movies have been shoot. Entry fee for Adults is 19.40eur, Teens 15.90eur and kids for 9.90eur. They have there amazing atmosphere, horse riding and tematic shows. 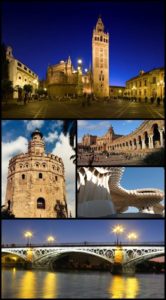 Sevilla – is capital and largest city of Andalusia and for sure you need to see there Old Town, what is about 4 square kilometres area. It contains three UNESCO World Heritages sites: Alcázar palace complex, Cathedral and General Archive of the Indies.

Tarifa –  is small town in province of Cádiz (Andalusia), located on the Costa de la Ruz (coast of lights) and across the straight of Gibraltar is facing Morocco. Tarifa’s unique wind conditions have made the beaches at Playa de Los Lances, Valdevaqueros and Punta Paloma the most popular in Europe for Windsurfers and Kiteboarders. Great place to see whales, dolphins and Pilot whales.

Marbella with it own article -> here

Gibraltar via it own article -> here

Article Name
South Spain
Description
Where I have been in South Spain and tips for other stuff what I missed but can be interesting for you. I have been in Malaga, Cadiz, Grenada, Cordoba, Marbella and Gibraltar.
Author
Mia

What I can say about this marvelous city on the south of Spain? I felt in love with it. Sooooo loooong beach side, where you can just walk...

On my trip to South Spain I could not miss this place and it was from Malaga just 2 hours of drive by car. When you pass the borders it is...

Every autumn is in Italy this special Tartufo event. For more than month around small village Alba is everything turning just around this...

When you travel to this paradise from middle Europe like me, prepare yourself for loooong journey :) When you are almost in the end, that...

Do you like autumn? NO? Me neither :-D So in autumn 2015 winter was comming and I decided that is time to leave. I fount out right now...